When we launched The Cursed Collection at The Arcade September Round lots of people asked why it was going to be retired immediately after The Arcade. We couldn’t really give an answer without revealing more about the Mystery Letters so we kept it all hush-hush.

The Arcade has now been open for a few weeks and lots of lucky people have solved the Mystery Letter Puzzle. For those of you that don’t know, each item in The Cursed Collection comes with a piece of a torn letter. There are 14 to collect, same as there are instruments. The Mystery Letter pieces can be traded (as long as they have not been ‘used’) and when they are all put together they lead the player on a mini Cursed Collection Puzzle to another prize.

The Prize at the end of this is a Gold Collection Hud, worth 800LS, and if the player then goes on to complete The Collection they will enter the prize room and gain access to the 26 prizes that come with the Gold Hud. 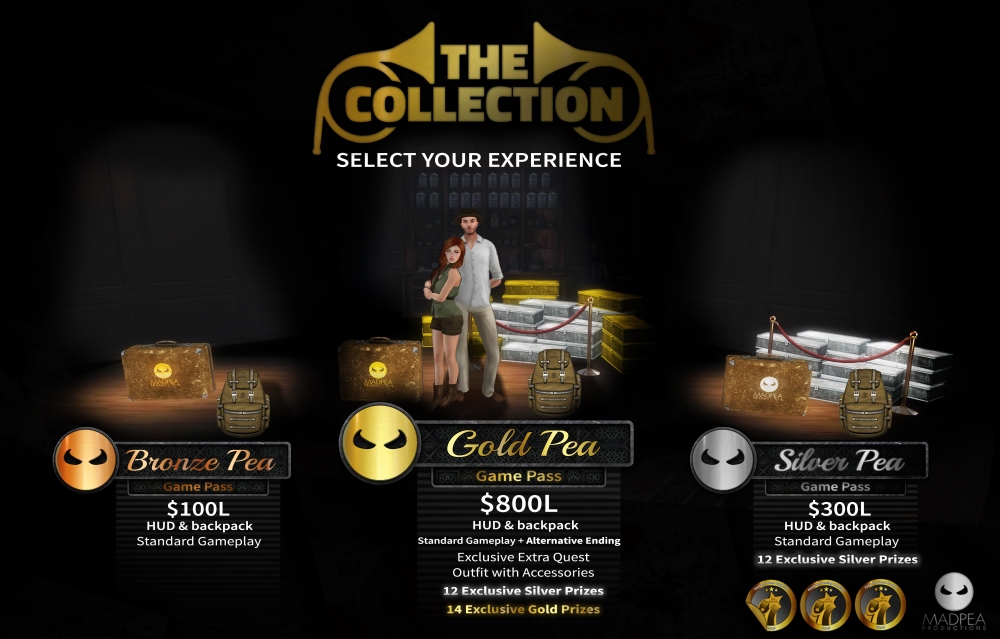 I contacted some of the The Arcade Collectors who had gone on to play the game to ask them what they thought of the experience.

Rowena Paine is an avid Gacha collector and has played MadPea games in the past but not for quite some time. Her last game with us was Sanity Falls. Rowena said:

I collected all the gacha items simply because I thought it was a creative idea to have haunted instruments instead of the usual halloween fare. I had no idea what the surprise would be when I got them all, beyond seeing them interact. Then I thought the mystery letter would be a coupon for a bonus gift or something. Getting the HUD and having a chance to play the game for more prizes was both generous and made the Collection gachas that much more special now after playing.

Hunting is a relaxing past time for me; having the story to follow made it even better because it engaged my imagination too. Honestly, I’m kind of lazy and often on a hunt, I’ll skip around and just hit the stores I know already. But this kept me interested. I love a good story. The Collection story, like the instruments, was an interesting spin on a spooky tale. I also had to admire the amount of skill and effort that went into the builds, the scripting, the concept design, …everything! And I knew as I hit each shop and saw their goods, that waiting at the end of it would be high quality stuff!

So yes, I’d play again. It was a wonderful gacha tie-in, and a fun showcase of the kind of creativity that makes SL so special.

I have to admit reading the comments from Rowena was wonderful as this is exactly what we wanted to surprise people with – hours of entertainment, great prizes and more than a little spook!

I also contacted Nasuke Omizu. Totally new to MadPea this was their first foray into the madness with us:

Yes, I did participate and finish The Collection after putting together the letters, and it was my first MadPea game as I had never played one before. If there were to be other MadPea games that carried a dark theme, I’d definitely play one again. As for the experience, I had tried other hunts before but I could never really get into them, I guess they weren’t really my thing. I was honestly expecting some kind of item after putting together the letters, but I was taken aback with the Gold HUD. However, since I liked the experience of getting there and the overall theme , I figured I would give this hunt a try. After finishing it, I was very satisfied overall. The hunt wasn’t more complicated than it needed to me and introduced a variety of new stores and places that I have come to like now. The prizes, especially for the Gold HUD, made the time I put into the hunt worth it. After this experience, I wouldn’t mind playing another MadPea game.

You’re in the right company Nasuke as Peatonville Asylum, our next game will be just as dark and the prizes even more amazing!

So, if you haven’t yet been to The Arcade to collect your Cursed Instruments you have until the end of this month to collect them all and play The Collection to gain 26 additional high quality prizes. Don’t take our word for how awesome it is take Rowena and Nasuke’s!